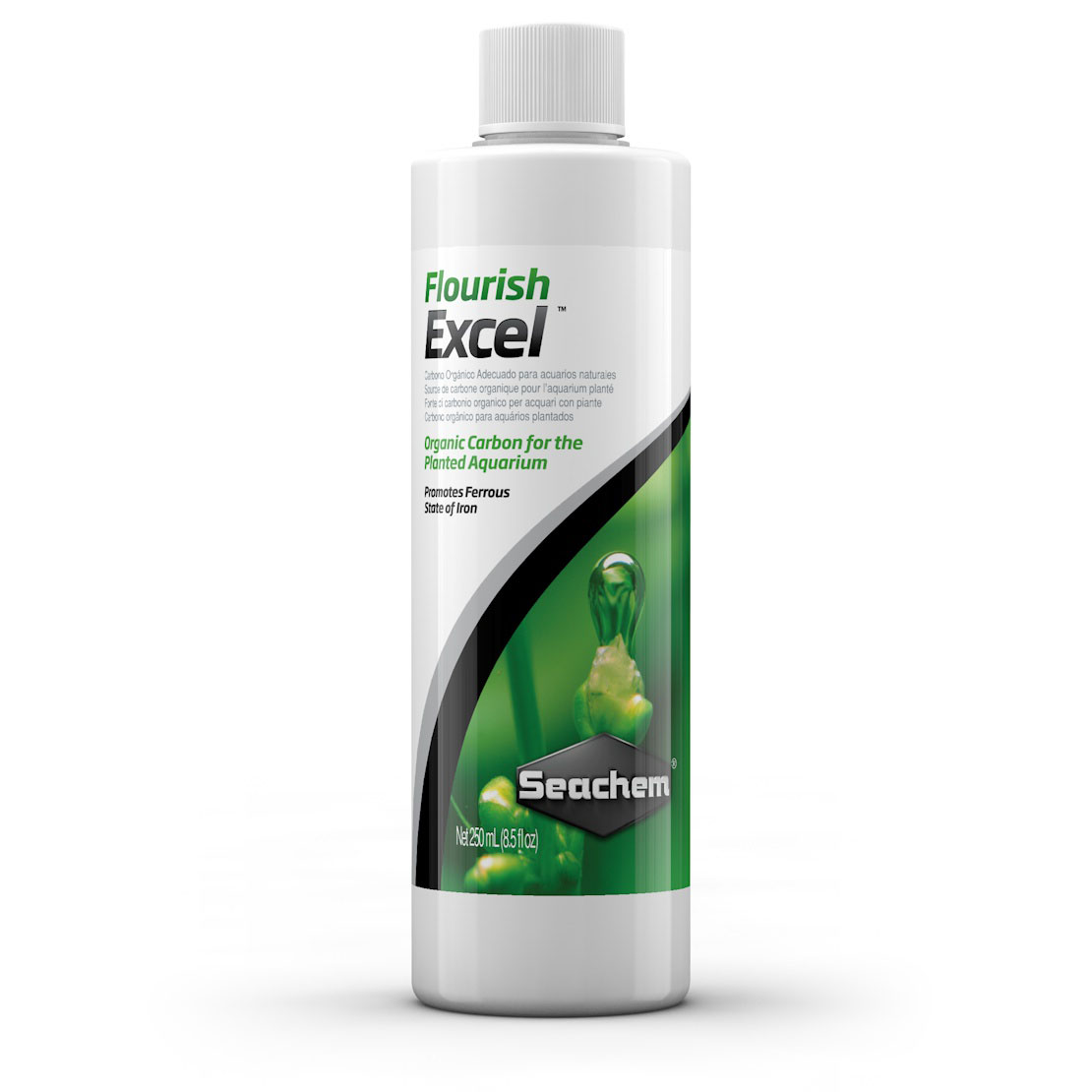 Flourish Excel™ is a source of bioavailable organic carbon. All plants require a source of carbon. This is typically obtained from CO2, but, may also be derived from simple organic compounds (such as photosynthetic intermediates). The use of either CO2 injection or Flourish Excel™ does not necessarily negate the use of the other. Because the processes of producing photosynthetic intermediates and building onto them occur simultaneously, one can derive a substantial benefit with the use of Flourish Excel™ either alone or in conjunction with CO2 . The combination is particularly ideal for situations when continuing to add CO2 could result in dangerously low pH levels. Flourish Excel™ also has iron reducing properties which promote the ferrous state of iron (Fe+2), which is more easily utilized by plants than ferric iron (Fe+3).

The reason plants need CO2 is to produce longer chain carbon compounds also known as photosynthetic intermediates. Photosynthetic intermediates includes compounds such as ribulose 1,5-bisphosphate, and 2-carboxy-3-keto-D-arabinitol 1,5 bisphosphate. Although the names are complicated, the structures are quite simple (5 carbon chains). Flourish Excel™ does not contain these specific compounds per se, but one that is quite similar. By dosing with Flourish Excel™ you bypass the involvement of CO2 and introduce the already finished, structurally similar compounds. It is in its structural similarity that Flourish Excel™ is able to be utilized in the carbon chain building process of photosynthesis. Simple chemical or enzymatic steps can easily convert it to any one to any one of the above named compounds (or a variety of others).

A: Chemical filtration medias will have a very minimal impact on Flourish Excel™ but not enough to warrant removing them from your filter when you dose this product.

A: Carbon intake is a function of photosynthesis. Based on this, it would be ideal to dose Flourish Excel™ during the day. But given that Flourish Excel™ can stay complexed as a carbon source for up to 24 hours before it dissipates, you can dose at any time of the day and the product will be available for the next 24 hours. Flourish Excel™ is not carbon dioxide and there is no impact on pH using it.

Because some people have observed reduced algae when using Excel, some people try to use it to treat unwanted algae. We do not produce or market it as an algicide and using it as spot treatment where it is overdosed or applied directly to a plant can cause damage.

With marimo balls or any sensitive plant you can begin with a small dose and increase slowly over time after observing for any negative reaction. If the moss balls are the only plants or the tank is sparsely populated, reduce the dose accordingly as they are low-light, slow growing plants and will not use as much carbon as other faster growing plants.

We had received reports from several hobbyists who said that they had seen Vallisneria melt when Flourish Excel™ was used with them.  We also had reports of them thriving with Excel.  Because of this, we decided to do an experiment to test this in our lab.  First we did a preliminary study with several val species (Amazon val, Italian val, corkscrew val, contortion val) with three tanks with different dosages: double dose, recommended dose, and a control with no Excel.

In that initial experiment, we did see some melting of leaves in the tank receiving the double dose, though the damage wasn't extreme and new leaves grew in strongly to replace the lost vegetation.  In the regularly dosed tank, we didn't see any issues.  This was a short term experiment just to see if we could see an effect and based on the results, we launched a more carefully controlled experiment where we tried to more carefully determine the best guidelines for using Flourish Excel™ with Vals.

We were able to make a few generalizations from our experiments and what we have heard from hobbyists:

1. Large doses of Flourish Excel™ can sometimes cause some melting of the leaves of Vallisneria.  The larger the dose, the more likely there might be an issue.

2. The damage is temporary; the roots aren't affected and it grows back strongly and tolerates future dosing of Flourish Excel™ even at higher than recommended doses.

3. Vallisneria normally tolerate the regular maintenance dose with no problem.  In both experiments they weren’t affected by the daily dose, only higher doses.

4. When other nutrients (nitrogen, phosphorus, iron, potassium) are dosed, Flourish Excel™ doses could be much higher without melting any leaves of the Vallisneria.

A: Yes, when used as directed, Flourish Excel™ is completely safe for fish.

CAUTION: Do not eat drink or get into eyes. In case of eye exposure, promptly & thoroughly wash eyes with water & seek medical attention.