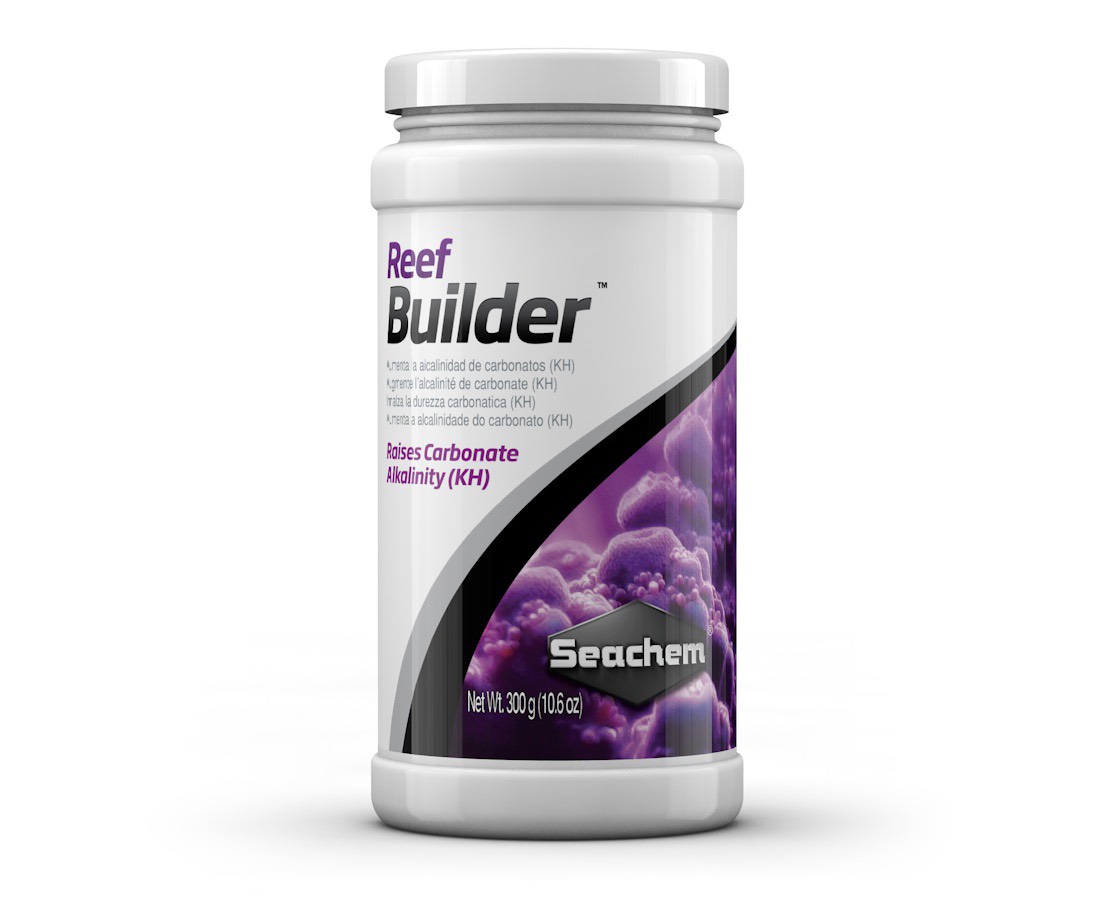 Use 3 g (1/2 level teaspoon) per 150 L (40 US gallons) twice a week. Dissolve in at least 250 mL (1 cup) of freshwater. Check alkalinity every 2 weeks and adjust amount or frequency accordingly. For precise dosing, use the Seachem Digital Spoon Scale.

Check alkalinity (use MultiTest™ Marine pH & Alkalinity to test alkalinity levels), then follow addition regimen above until alkalinity is adjusted to 3-6 meq/L (8-17 dKH). Each 3 g/150 L will raise alkalinity by about 0.25 meq/L. Quantity or frequency can be adjusted, but do not exceed 12 g/150 L per day. Thereafter, use as required to maintain alkalinity.

After determining the alkalinity consumption rate, set up a continuous drip system. Use the following formula (or skip the math and use our Dosage Calculator) to determine how much to add to your top–off water: m=0.08va (m=grams to add to top off water, v=volume of tank in liters, a=amount to raise alkalinity in meq/L). For example, if you want to raise your alkalinity by 1 meq/L in a 200 liter tank, then you would add 0.08x200x1=16 g into the top–off water. [For reference: 1 gallon=3.8 liters, 6 g=1 teaspoon].

To reach your desired level use

Reef alkalinity should ideally be maintained at 3-6 meq/L (8-17 dKH). Alkalinity should not be allowed to fall below 2 meq/L. It is advisable to make large adjustments slowly to avoid overshooting intended level or shocking corals and inverts. Dissolve in at least one cup of freshwater.

Do not exceed 12 g/150 L (40 US gallons) per day. Excess alkalinity may enhance the loss of calcium, magnesium, and strontium. Do not directly mix with any calcium, magnesium, or strontium supplement. Best if calcium & carbonate additives are added on alternate days or at least 30 minutes apart.

A: When dissolving at the prescribed concentrations it is normal for the solution to be somewhat cloudy. Add Reef Builder™ to your RO water, and stir it for a few minutes or let it stand about 10 minutes, then add it to your tank. It will dissolve rapidly at this point. Pre-dissolving Reef Builder™ is recommended mainly as a more gentle delivery method (as opposed to just putting the dry product directly in the tank) not as something you would dose with (in which case you would want it all dissolved). It is also normal for small amounts of the material to not be dissolved if you let the RO or DI water and Reef Builder™ solution sit overnight... small amounts of calcium carbonate can form sometimes within the bottle, and it is this material (chalk) which is very insoluble. It will eventually dissolve in the tank however since the amounts are very small and the volume of the tank is many times greater than the 1 gallon of RO or DI water.

Divide by 7 to get daily amount

For your reference: We have found that 1 tsp of Reef Builder can be dissolved successfully for every 150 mL of liquid. These calculations would allow for 6.6 tsp (or 33.3 g) per 1 L of liquid. These are only estimations based on our findings, and results may vary in a larger volume of water.